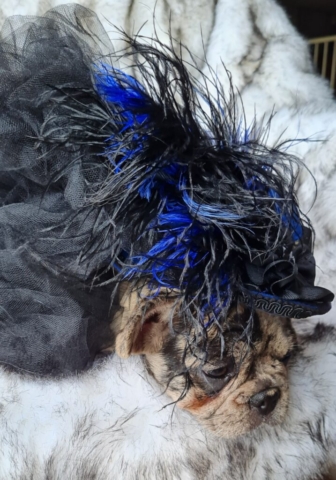 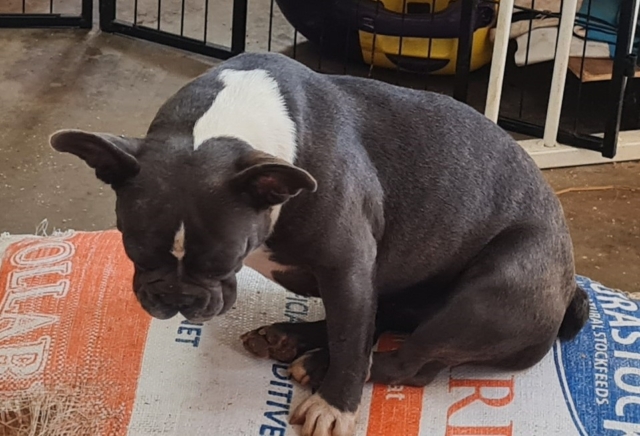 Introduction to colours and patterns in a dog’s coat

There are two basic types of pigment responsible for the coat color, eumelanin and phaeomelanin

Eumelanin is basically black pigment; it colours the nose and the pads as well as the coat and Phaeomelanin is Red down to Cream; it only colours the coat. Most dogs have a mixture of the two and that’s when it gets interesting.

On this page I don’t want to get into the details of colours so I will try and keep it simple.

Nature has a wonderful way of turning 2 colours into thousands of different looks.  Some humans have difficulty with this and try hard to keep certain breeds with basic colours.  They do this by only allowing certain colours into their standard.    They then come up with wonderful horror stories to justify their choices.  However, if you look outside the breed you will find other breeds that collectively contain all the available colours and patterns without all those horrible things happening.

The blue French Bulldog has had its share of horror stories but the dilute gene that make him blue is the exact same gene that make the entire Weimaraner Breed blue and they have thrived and survived.

Every French bulldog carries a Dilution gene.  If both parents give him the “d” version then the colour of his coat, his nose and paws will all be diluted.

On top of all of that nature adds patterns to the mix and that can be applied to any of the colours, including the diluted colours, which can completely change the look of a dog.

Genetics have come a long way since I started breeding but they are still finding many new things.  There was inconsistency in some of the Brown French Bulldogs that lead geneticists to believe there had to be another gene for brown.  For a long time they called it “untestable Chocolate” but it is now been found and called Cocoa.  Cocoa is a slightly darker Brown then Chocolate and is only found in French bulldogs at this stage.

So what are the Colours?

(Lilac and Isabella are often intertwined.)

And what are the Patterns?

Patterns are applied to the colours and the dilutes.  There can be more than one pattern on a dog and sometimes one pattern will cover another and it is only by DNA testing that you will know it exists.  As an example you might have a Blue Brindle Pied with tan points and a mask.

I realize that I haven’t covered every colour and pattern but I hope helps explain a few things.